In December 1971, the tire factory celebrated One Million Week, as the annual production of vehicle tires exceeded one million. Over half of the production consisted of Hakkapeliittas.

The Hakkapeliitta Radial 06, introduced in the same year, was the first radial winter tire. Demand for radial tires was high, so the newly built tire factory was expanded. The company switched its domicile from Helsinki to Nokia at the same time. Soon, tires were also manufactured in Lieksa, where Nokia Kumiteollisuus opened a new factory in 1974.

The breakthrough of the radial tire continued. The Hakkapeliitta NR 08 from 1977 was the first steel belted winter tire. Tubeless tires were also on the way, as a tubeless radial tire was offered for lorries. An entirely new area, special tires for forestry machines, was also at the core of the R&D activities.

The worldwide oil crisis increased the price of motoring, emphasising economy in tire choices. However, tires from Nokia convinced even the most thrifty consumer: “Drive in Finland on Hakkapeliitta tires. Only 2 pennies per kilometre!”

In the middle of the decade, recession hit tire production. Demand was reduced due to the longer service life of radial tires, lower speeds and the decline in new car sales reduced demand. By 1979, the recession was over, and tires were being sold as before. Hakkapeliittas were in high demand, since winter tires became compulsory in Finland in December 1978.

The first body type used on car tyres was the diagonal, or bias-ply, type. In this structure, the tyre body is formed from crossed textile layers, with the angle between the threads affecting the characteristics of the tyre.

The development of the radial tyre, one of the most significant innovations in tyre technology, started in the 1960s.  The radial tyre consists of a diagonal thread body with a belt layer on top. The threads are radial to the tyre, and the textile or steel belt runs along the circumference under the tread surface.

Compared to a bias-ply tyre, a radial tyre is more durable, and its characteristics are easier to modify.

On the other hand, the manufacture of radial tyres is slower than that of bias-ply tyres, and it requires skilled assembly workers. The ideal is a balanced tyre.

The radial tyre was patented internationally already in 1913, and the first models entered production at the end of World War II. The radial tyre had its breakthrough in the 1970s, and it quickly became the dominant type. In 1975, more radial tyres than bias-ply tyres were being manufactured for passenger cars in Nokia.

For winter tyres, the radial pioneer was the Hakkapeliitta Radial 06 that entered production in the autumn of 1970. Demand for the new introduction exceeded all expectations. The handling characteristics of new cars favoured the radial tyre, which was at its best at slightly higher speeds.

The structure of a radial tyre also affected studding: From the 1970s onwards, studding was centred along the tyre shoulder in order to achieve the best possible steering comfort.

The next step was the steel-belted radial, for which the research and development was started in 1972. Steel-belted tyres caused an export boom in heavy tyres. Nokia Kumiteollisuus supplied tractor tyres to Valmet in Brazil starting from 1973.

The Hakkapeliitta 08, the steel-belted winter tyre for passenger cars, saw the light of day in 1977. Steel-belted Hakkapeliittas were now at the top of international tyre development.

Bias-ply structure. The body is formed from four or more cord layers, where the direction of the cord is alternately at a 30 to 40 degree angle to the centre line of the tyre.

Radial structure. Under the tread lies a belt consisting of four longitudinal cord layers. The direction of the body thread is radial. (Nokian Kirjeitä 5/1970) 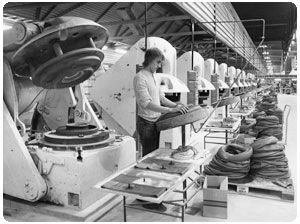 The new tyre factory in Lieksa started with bicycle tyres in 1974. The manufacture of lighter bias-ply tyres was transferred there during the latter part of the decade. Later, the Lieksa factory focused on bicycle tyres and heavy inner tubes. In 2004, the company was sold to Suomen Kumitehdas Oy, whose affiliate Suomen Rengastehdas Oy manufactures winter tyres for bicycles in Lieksa, among other things.

Image: Curing presses for inner tubes at the Lieksa factory in 1975. 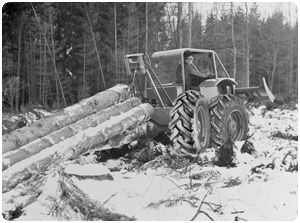 Hakkapeliittas were already being supplied to the industry in the 1930s when the manufacturing of the Finnish Sisu lorries began. The war years brought in experience of equipping all sorts of vehicles and machines with tyres. At the beginning of the 1960s, the company signed long-term contracts for factory installed tyres, such as for Valmet tractors and Rosenlew harvesters. In the 1970s, the primary product became the forestry tyre, for which Nokia's rubber industry unit developed a durable nylon weave and a unique Steel Fortified puncture protection. The tread pattern was varied according to machine types and operating conditions. Currently, Nokian Heavy Tyres is one of the best-known developers of special tyres for demanding applications. The company is the universal market leader in forestry tyres. 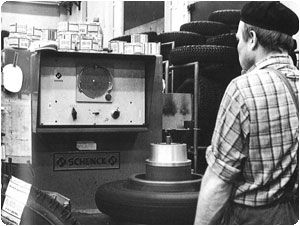 Car tyres were the rubber products most affected by the increase in the oil price. The recession hit the tyre production at Nokia Kumiteollisuus with a delay. In 1975, sales were still increasing and at 1.1 million tyres per year. The very next year, production fell by one fifth to 720,000. In the uncertain economy, fewer new cars were registered and purchasing tyres was postponed. Tyre sellers had their stocks full and surplus production lowered prices. Even winter came late in 1977. After 1978, the signs of an upswing were in the air again. 100,000 new passenger cars were registered in Finland and exports to North America picked up.  Production in 1979 exceeded 1.2 million. The Hakkapeliitta had regained its strength. 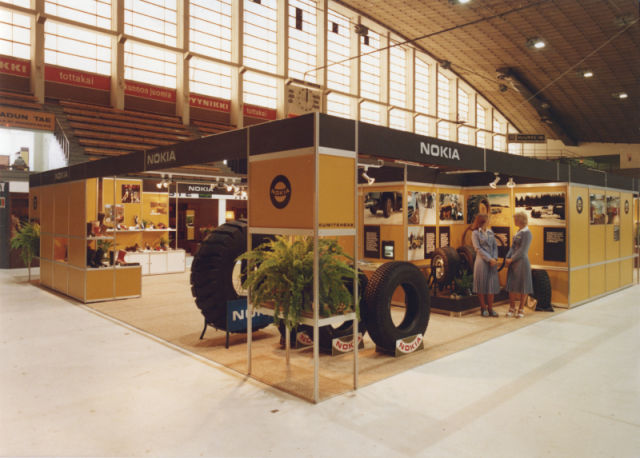 The oil crisis hurt winter tyre sales. Driving became more expensive and consumers started saving on tyre purchases. The marketing department that had moved from Helsinki to the Nokia factory at the turn of the decade worked long hours to sell Hakkapeliittas to Finnish drivers. During the recession, a point was made about the origin of the products: “Drive in Finland!”. Or their durability: “Hakkapeliitta - durable goods.” A new feature was to use a true winter driving expert, a test driver, in the advertisements. “Test driver says: Hakkapeliitta is number one.” Strong facts were also brought in to involve buyers. “It's about friction. Hakkapeliitta has 360 friction segments.”

Image: Hakkapeliittas on display at the Tampere Fair in 1978.