Raw materials
The main raw materials of a tire are natural rubber, synthetic rubber, carbon black and oil. The share of rubber compounds in the total weight of a tire is more than 80%. The rest consists of various kinds of reinforcing materials.

Approximately half of the rubber is natural rubber from a rubber tree. Rubber trees are grown in the tropics, in countries like Malaysia and Indonesia. Most of the synthetic, oil-based rubbers come from European manufacturers.

Approximately one-third of the compound consists of filler substances. The most important of these is carbon black which makes the tires black in colour. Another important filler is oil which is used as a plasticiser in the compound. Furthermore, hardening or vulcanising agents, various booster chemicals and protective agents are used in the rubber compounds.

Mixing
In the mixing stage, the raw materials are mixed together and heated at a temperature of approximately 250 degrees Fahrenheit / 120 degrees Celsius.

Developing and adjusting the recipes is an important part of the tire development work.

Component manufacturing
The compounds are used in rubberising various components, such as cables, textiles or steel belts. A tire is manufactured from 10–30 different components.

Most of the components are various kinds of reinforcements.

When the components have been drawn onto the belt drum of an assembly machine and the frame of a tire has been set on the bulkheads of the stretching machine, the machine’s loading wheel transfers the unity formed by the surface and the belt onto the frame.

The frame is then pressurised and stretched to fuse with the above-mentioned unity. This is how a green tire is manufactured.

The high steam pressure conducted into the curing pad inside the curing press presses the elastic green tire against the tread pattern and side texts inside the moulds, giving the tire its final appearance.

Inspection
Each passenger car tire is inspected both visually and by a machine.

Attention is paid to any faults and defects with the appearance of the tire in the visual inspection. The machine measures the pattern as well as radial throw and lateral force variation of the tire.

When a tire has been inspected, it will be tested, labelled and transferred to the warehouse for delivery. 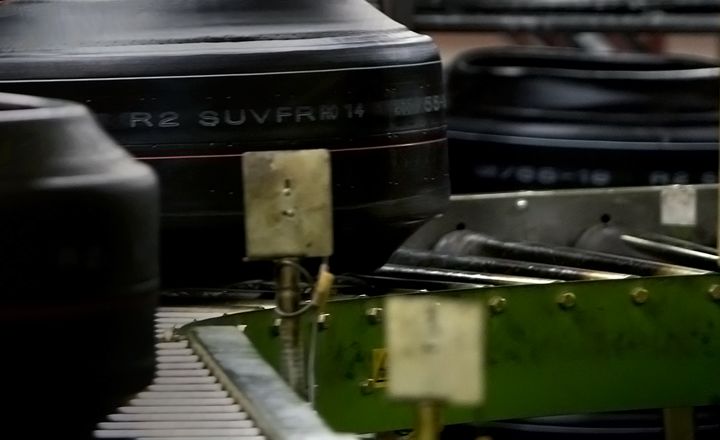